This battle actually took place some time ago but I hadn’t got round to blogging. This was the official first battle in my very open ended campaign focussed around the Iberian Pennisula between 1000 and 1100 AD. With the fall of the Umayyad Dynasty and the Caliphate of Córdoba the whole of what was later to become Spain split up into a multitude of independent and frequently warring states or ‘Taifa’ . Broadly mixed between Muslim and Christian states it was a time of great turbulence with only very broad religious delineation. All sides used mercenaries from both their own and other religions. Gradually larger states absorbed smaller states until toward the end of the period the reconquista, the gradual reclaiming of Spain by the Christians took place with its most famous mercenary soldier El Cid.

The campaign has no clear direction at this stage or clear objectives and is in fact just the opportunity to collect and game with beautiful colourful armies. With the wide use of mercenaries there is huge flexibility, whilst based on the key historical situation the rest I will make up as I see fit 🤭 I will content myself with smaller battles until the requisite armies are ready then may develop something more linear between the Christians and the Muslims ?

The Taifa’s of the Iberian Pennisula circa1030 AD

So to our first battle a smallish border skirmish between Zaragoza and the much smaller state of Alabarracin. A dispute has arisen over grazing and watering rights and both states have dispatched small forces to enforce their claim. We played with two equal forces using lion rampant rules. The objective of both forces was to finish the battle with more units over the river than the enemy. Simple stuff...... 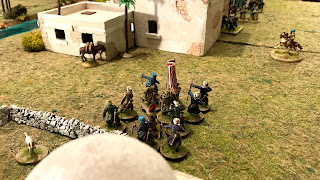 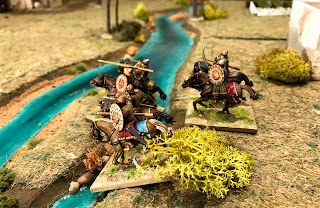 Immediately light cavalry are sent across the river 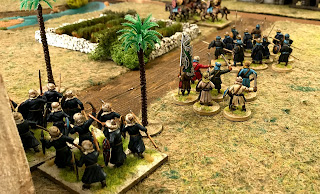 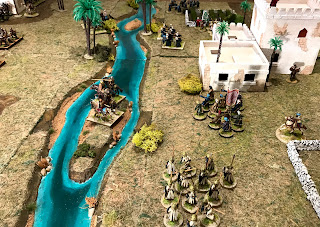 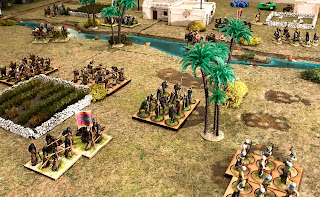 The Zaragoza Forces has more heavy infantry and some newly equipped heavy knights ! Their leader Prince Haseen al Tujib is dressed in the newest Christian heavy armour. (But you can’t see him here as it is skulking at the back !) 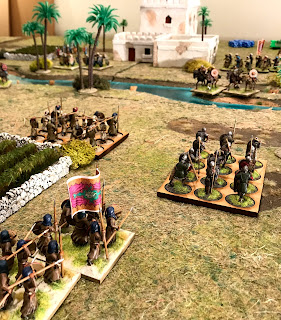 Zaragoza spearmen with Berber mercenaries advance towards the river 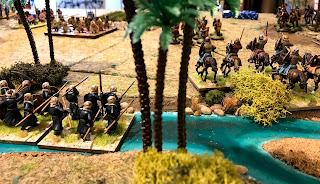 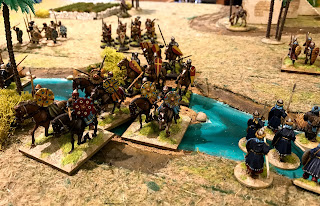 Unless they fail their command roll and are charged in the rear by heavy cavalry, it doesn’t end well, but at least the heavy cavalry have been drawn out of position andinto the shallow river where they are less effective 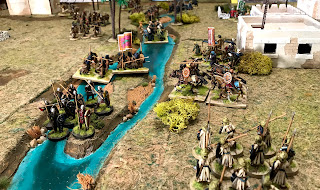 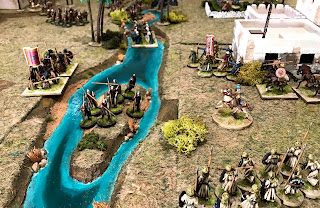 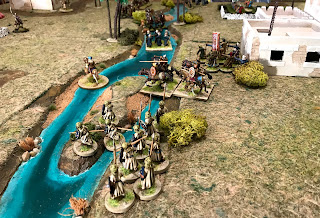 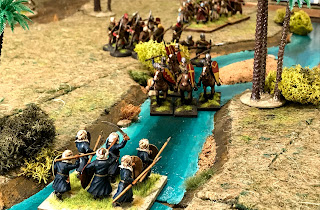 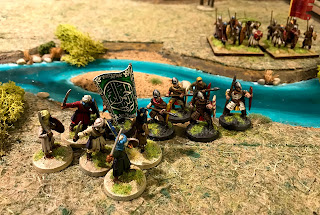 Prince Razzin’s personal bodyguard of elite infantry now runs forward to slice through any remaining enemy on their side of the river. 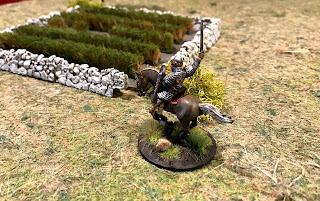 Finally a shot of Prince Haseen he is no longer skulking but has chosen to flee the battle field. No doubt he will return to exact some form of petulant revenge, but for now the boundary has held.

A fun game played in great spirits my Forces were very lucky and what looked like an impossible task when the light cavalry were wiped out became a clear victory for Albarracin.
Posted by Matt Crump at 20:32