Sorry for the lack of posting recently, as mentioned in previous posts we were away in Arran for a few days celebrating our wedding anniversary. Unfortunately after dodging the virus for 2 years my wife decided to give me covid as an anniversary gift ! It has taken about 10 days to start feeling reasonable again although the symptoms are pretty much just a horrible head cold. Not an ideal state for painting but there is light at the end of the tunnel.

I have managed to finish these German Pak 40 Antitank guns 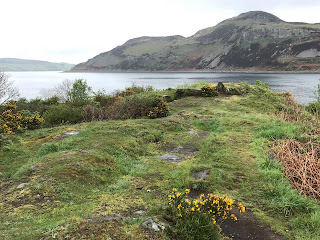 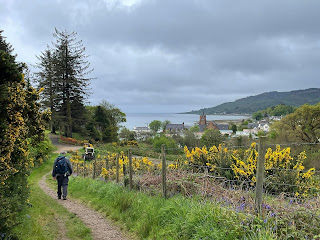 Whiting bay where we stayed 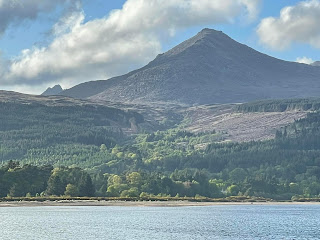 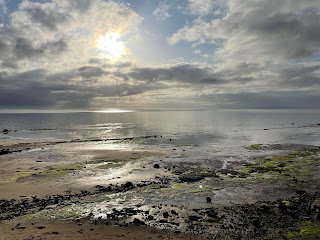 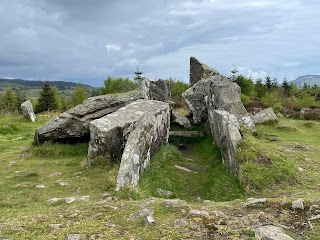 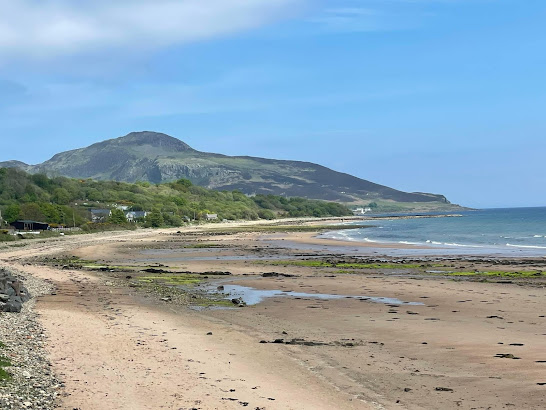 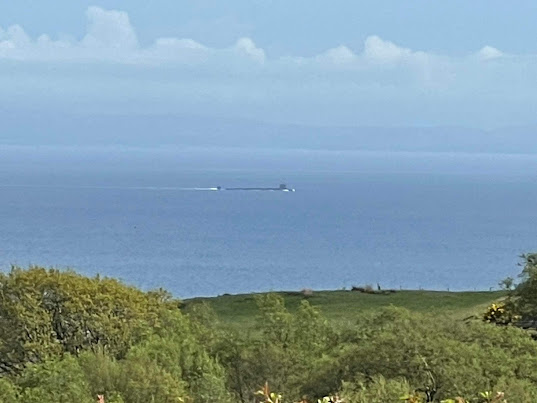 We also spotted this sailing south, I’m afraid I know almost nothing about submarines but very impressive. (I should mention most of these photos were taken by my wife 🙂)
Sadly had to cancel our game this weekend but hopefully I will shake the cold off soon👍

We’ve not seen an Operation Sealion battle for a while so with a new visitor to the Dungeon I thought this would be a good option if nothing else it normally looks nice. George has already written up the battle here http://musingswargameslife.blogspot.com/ . By way of background we are in the morning of Day 2, the British overnight have reformed a defensive line along West Wood but they have been pushed back again and it is clear the road junction at Sixmile Cottages is key to opening up Stone Street and the way north to Canterbury. The map below shows the position at the road junction the German main force will arrive from the south their Recon force randomly along one of the roads marked with red arrows. The British have positioned a  Homeguard unit at the junction with an antitank gun. British armour will hopefully arrive from Elmsted. 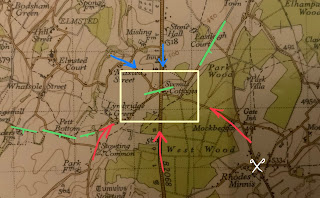 The defense at Sixmile Cottages, Rhodes Minnis saw fighting earlier in the day 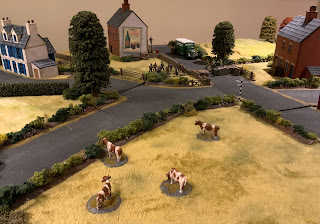 The junction at Sixmile Cottages the Homeguard have thrown up a barricade, at least the cows seem unconcerned 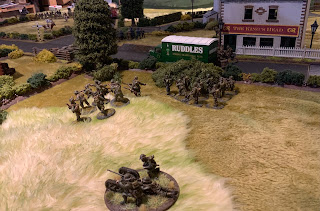 The British reinforcements arrive from the north, they have an anti tank rifle Oerlikon , Panzers beware ! 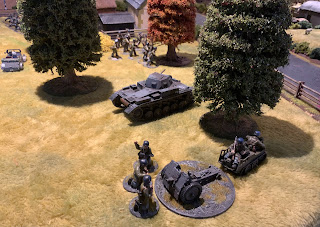 The German force approaches from the south. Some fallschirmjager have been pulled into the force including a 75mm towed by a kettenkrad (first time it has been on the table) 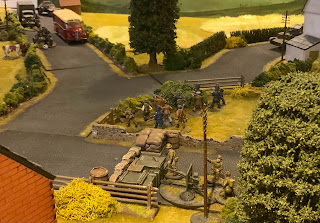 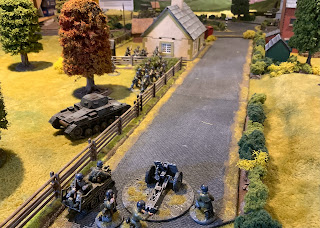 The Germans have pushed upto the road, but have little luck early on (bad dice rolling by George) 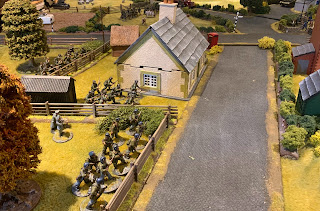 The infantry is now readying to push forward in force 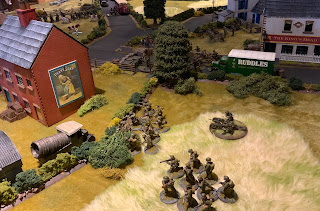 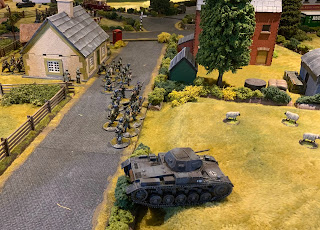 Germans break across the road, I seemed to forget to take any photos of the the tank battle which was taking place to the west. 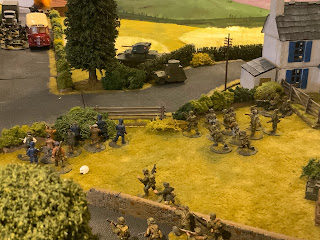 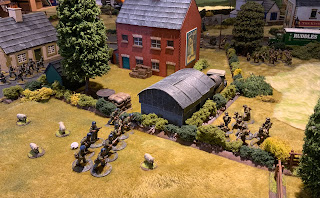 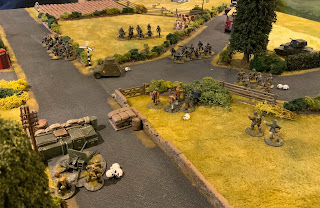 Eventually the Germans have to break cover and rush forward on mass, they pay a heavy price but the British defenders are being thinned out. The British 2lb gun seems to have missed placed it ammunition ! Stuck twice by random events, on that note the British saw some friendly fire the British regulars mistaking the Homeguard for German 5th Columnists 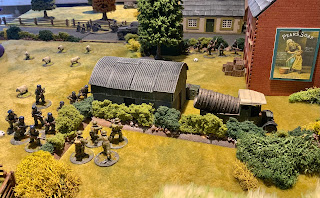 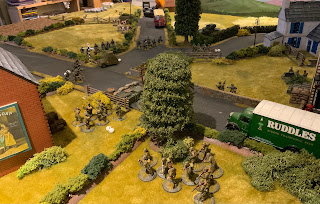 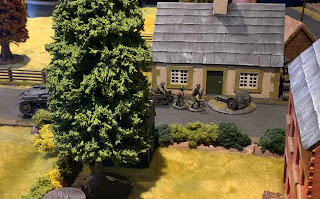 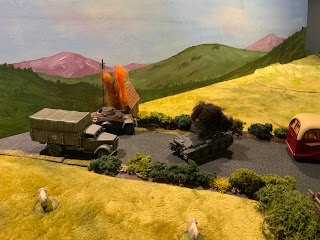 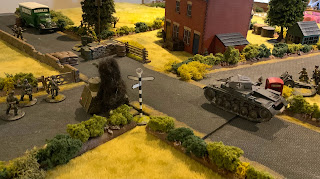 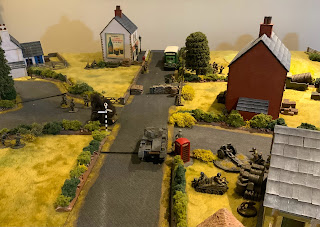 …and the defenders are just too few the Germans are now occupying both of the red cottages and the British have nothing in reserve. We gave the victory at this point to the Germans but they had paid a heavy price with the majority of their infantry at or below 50% and they lost nearly the whole of their recon force.
A fine battle, always nice to revisit the campaign and nice to introduce another player to the dungeon. We are not quite locals but in the scheme of things less than an hour apart with both of us close to retirement opens up some interesting prospects.
We have had another bank holiday weekend with pretty good weather and with a few other adventures planned in the future I needed to test some kit out in the hills. So I packed my rucksack and headed away from the crowds. 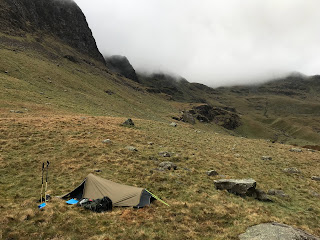 My campsite for the night, well off the beaten track 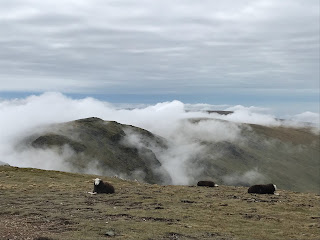 This enabled me to start walking early and be on the tops before any holiday crowds, I had the summit of Fairfield to myself, well only some Herdwick sheep for company, the cloud and weather conditions were really magical and I stood and watched it develop for ages on my own 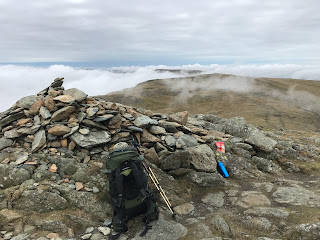 Another shot slightly later from a different summit.
That’s it for now probably no gaming next weekend as it is our wedding anniversary and we are away in Scotland on the Isle of Arran.
Thanks for passing by 😀