Wargames Soldiers and Strategy 106 back in January had an article by Nick Stock on relighting the battle of Sagrajas broken down into a series of smaller large skirmishes. With my developing Al Andalus collection and the continued necessity of virtual gaming this was too good an opportunity not to play another linked series of battles as a mini campaign. I won’t go into the background too much as this is succinctly covered in the article. Suffice to say in 1085 a Christian force under Alfonso VI king of Castile bringing together a force from several Christian states attacked an Andalusian and Almoravid force camped near Badajoz. The article breaks the action into three separate phases although I am sure this could be expanded or contracted into a single large battle (perhaps later in the year). The three scenarios are the initial surprise assault by the Christians on the Andalusian camp, the follow up by the Christians who followed through into the Almoravid camp where they were held and then pushed back by rallying Andalusian. The final phase has the Spanish being outflanked as they try to regroup and routed from the field with Alfonso lucky to escape badly wounded.

So the scene is set we will be using Dragon/lion rampant as the go to rules for these virtual skirmish games, army sizes are about 40 points so we relax the distance rules with friendly units. The first scenario is the assault by Alfonso on the Andalusian camp, the Muslim forces are commanded by Yusuf ibn Tashfin. 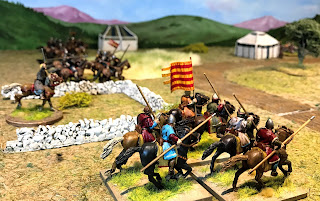 Spanish knights gallop forward in the early morning light, this restricts the range of any missile fire 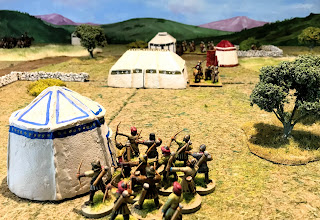 The Andalusians have been allowed to randomly select three units to hold the camp, the formal objective is for either force to hold the three central tents when one side is forced to retreat 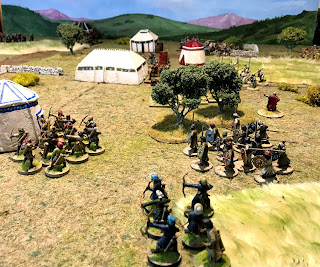 Andalusian reinforcement make a rapid advance from their baseline, but they are mainly light troops against heavy cavalry and we know how that goes ! 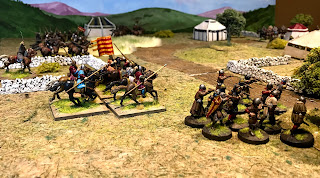 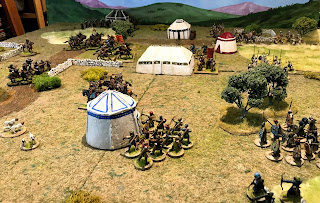 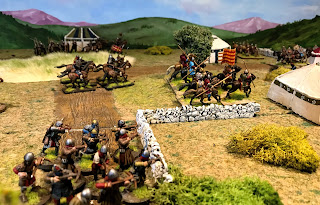 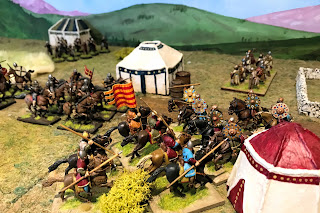 Meanwhile on the road a heavy clash of horses, heavy knights manage to catch light Arab horse men who are wiped out 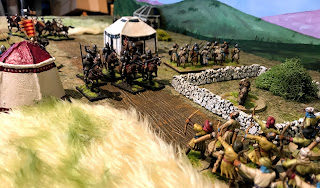 Yikes ! The cavalry have already broken through 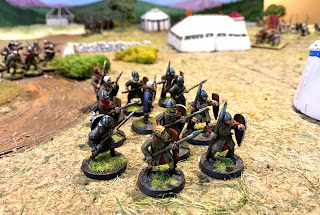 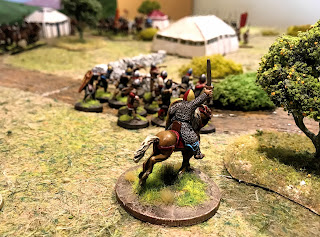 Urged on by Alfonso himself 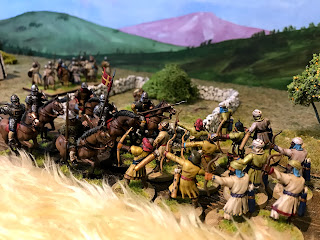 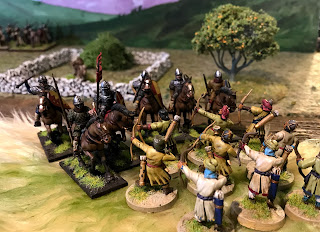 Luckily the archers survive the first charge and are able to take cover in the long grass where they use the cover to drag the cavalry off their mounts and butcher them with pointy sticks ! Ha ! 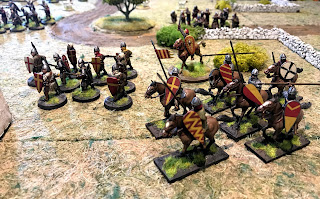 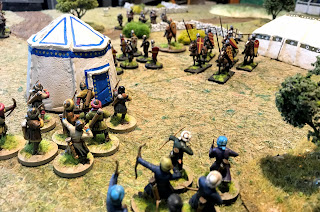 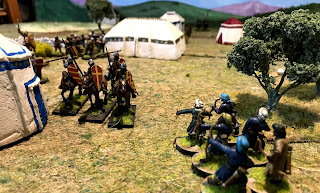 And after another charge the archers flee 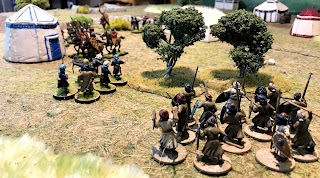 It is all over.......a good win for Alfonso who has taken the whole Andalusian camp

It seemed easier than it was but the knights proved on this occasions too strong and charged in just when they were needed, the Andalusians will fall back for scenario two where the Spanish charge in to the Almoravid camp and are hopefully held ?

Thanks for looking 👍
Posted by Matt Crump at 12:53