Looking for something colourful to start the year I dug out Wargames Soldiers and Strategy Magazine No 116. (On a side note I am finding WSS an increasingly good magazine👍) David Davies had an article/scenario on the battle of Mersivan, in the unlikely event he reads this thanks for setting the scenario up. I am sure people who take the time to submit would feel happy people not only read but play the scenarios ? Anyway I won’t cover the background in detail, as it is covered in brief in the magazine and on the internet. But in terms of context for our battle. Mersivan took place in 1101, a mixed and disunited force of Germans, Franks, Lombards and Byzantines were caught out by the Turkish leader Kilij Arslan. Over a period of three days on the flat arid terrain of Anatolia well suited to the Turkish cavalry the crusaders were pretty much wiped out by the mobile cut and run tactics of the Turkish cavalry. 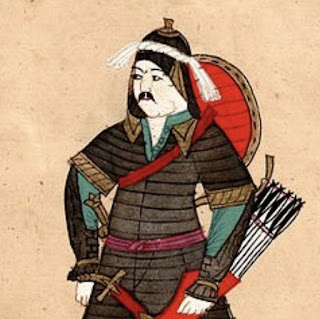 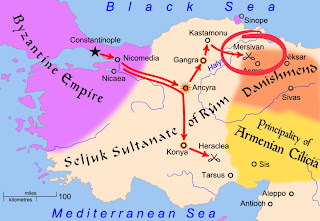 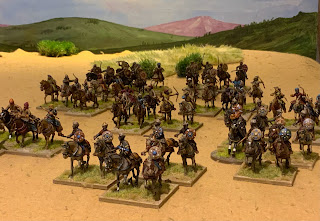 If you don’t look too closely I have just enough figures for the scenario using Lion Rampant, here is the Turkish horde all of whom are mounted and armed with bows. At some point I will do a larger version of the battle as I have a good number of similar cavalry not yet painted. 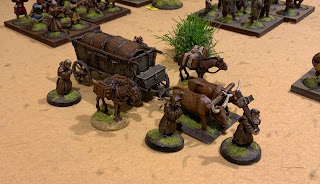 The Crusader baggage train one of the objectives for the Turks 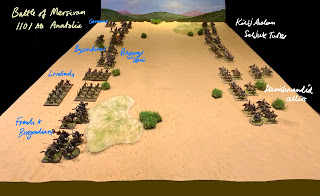 The initial setup. A flat arid plain in northern Anatolia. The light grass is just to break up the terrain and has no impact. I used the force lists from the magazine only slightly modified, the crusaders are split into four factions French, Lombards, Germans and Byzantines. The Turks are supported by Danishmenid allies and have a small group of reinforcements who have a random entry from turn 2. But can come on at any point. We modified the rules with a failed activation not ending your turn simply effecting the unit. We had three separate victory conditions. 1. If the Turks are in control of the baggage train at the end of any crusader turn they win 2. If either sides drops to only four remaining units they will withdraw 3. If the total number of units on the table drops to 12 we would roll 2 x D6 and if the score exceeds the remaining units the game ends as a draw. I took quite a few photos but having reviewed them they nicely reflected what became a very challenging mobile/swirling battle, perhaps befitting the historical battle. I’ll do my best to at least give a summary of the events. 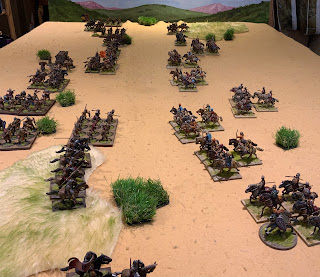 The Turks main advantage is their ability to shoot at range so they immediately look to close into bow range, the crusaders look to protect the baggage and some of their
infantry are pushed forward as well. 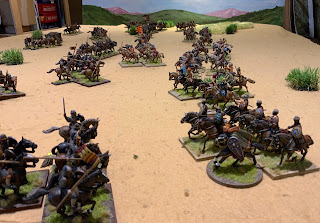 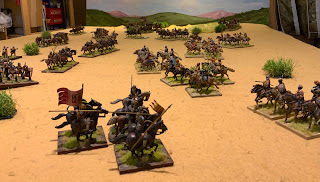 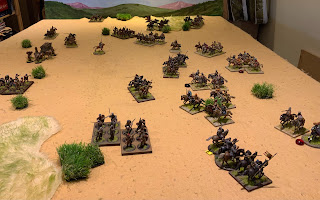 The Turks need to avoid close combat with the heavier cavalry so start to skirmish backwards and forwards, but when a couple of units are caught they become battered 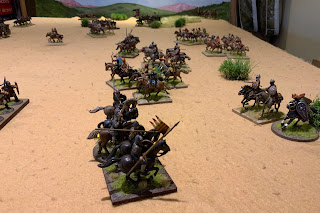 But they rally and surge forward again 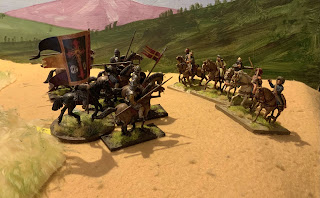 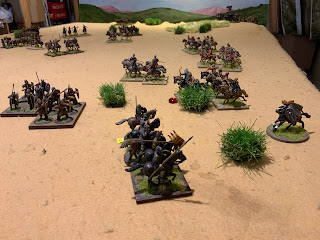 After several turns of hard, back and forth combat takes place the Crusader centre opens up and the Turks surge forward again 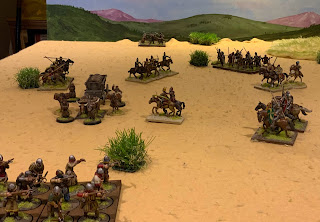 One small unit heading for the baggage but they are chased by crusader cavalry, in the foreground the crusader crossbowmen, seem to spend their entire battle looking for bolts and  barely get a shot off in the whole battle, in the middle distance you can also see the Pecheneg horse archer mercenaries employed by the crusaders. 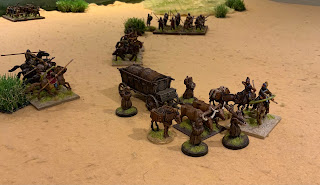 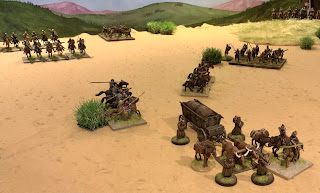 Finally the Turkish reinforcements arrived on the far left flank 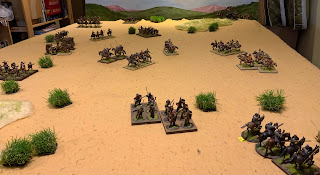 The overview at this point, still with both forces in with a chance 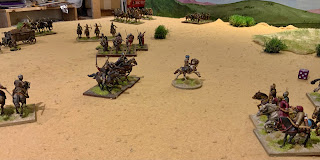 But then the unit with Kilij Arslan is caught and he is forced to flee the field…. 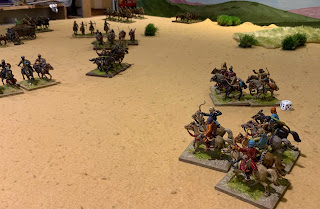 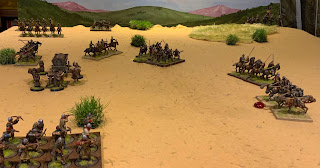 Bringing the remaining Turkish units down to 4 forcing the them to retire with Kilij.
Another fun battle and nice to play with so much cavalry for a change. It felt like a sudden demise to the turks but in hindsight we could see their numbers were dwindling. The reserves came on two turns too late to make a difference. The baggage train had at least been captured if not held sufficiently for a win and a significant number of crusaders had been taken down, although to be fair these were mainly the weaker units. The rules worked well with the slight amendments to activation. The crossbowmen managed to only get one shot off during the whole battle 🤪 We will be coming back to the crusades later in the year when I have painted some more Seljuk cavalry.
Hopefully blog our latest AWI battle soon. 🙂
Matt