Grunts and Martians : trying something new

Every now and then it is good to try something different so a mate brought round two new games/systems to try out. Stargrunts is apparently quite big in America it has been around for a while with I think the original rules being written in the 90's or before. Based on roughly 28mm scale figures it is a near future/Scifi squad/skirmish game. It has a feel of 40K but without the aliens, at least we didn't play with Aliens and I don't remember seeing them in the rule book. 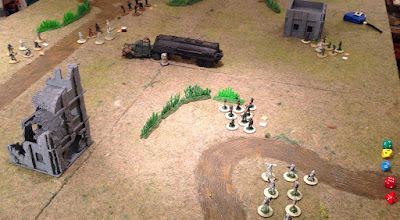 We have played a couple of taster games to get the hang of the rules. The interesting and novel (well for me anyway) bit in the rules is the use of a range of different dice D4, D6, D8, D10 and D12 to provide the modifiers and the element of chance. Once you get your head around it, it is quite a neat idea but i have no idea if it is mathematically sound ? So the idea is if your armour save is say D8 but you are in cover you roll a D10 and if you are lying down a D12.

The game is squad based but includes vehicles as well although we have only experimented with these. Apparently you can still buy the stuff and the figures are quite good. 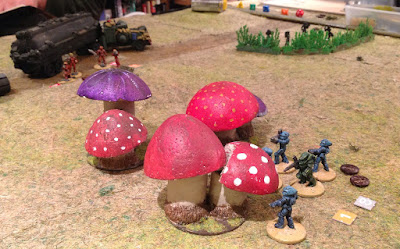 We have also had a couple of games of Martian Attack this is the newly released Martian invasion game by Mantic having played Deadzone a few times it is easy to pick up as the basic rules are the same. Quite fun and not a bad little game...