The second in our Battle for Caen Campaign. Later on the 7th June (I have seen several different dates for this ?) the 12th SS Hitlerjugend had captured the village of Cambes en Plaine. The 2nd Royal Ulster Rifles were tasked with re-taking the village as part of a wider counterattack by the 9th Canadian Division. The Rifles were supported by tanks of the East Riding Yeomanry, Divisonal artillery support, Naval artillery from HMS Danae and Royal Engineers.

This was going to be a tough scenario for the Allies with the Panzer grenadiers dug in in the village and supported by a strong battery of 88mm guns. 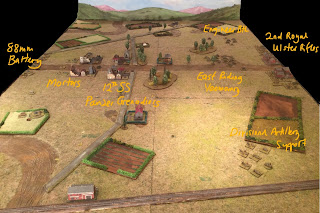 The start of the allied advance, the Royal Ulster Rifles entering form the North (right) through village of Anisy, their challenge is to get across the relatively open ground to Cambes en Plaine where the SS are dug in. For our scenario the Royal engineers, who according to the accounts I have read fought more like an armoured unit, have been formed into a separate independent battalion and have moved to cover the right flank of the attack. They have various armoured cars and a couple of Cromwells. The Germans have set up a strong mortar presence behind the village and can fire straight down the road at any advancing units. 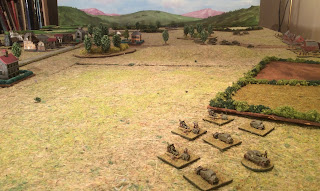 The Canadian division is supporting the attack with an anti-tank unit who have moved to a position to give covering fire form the left flank. This proved far to vulnerable to attack and they should have taken the extra time to move into the fields where they would have benefitted from over. 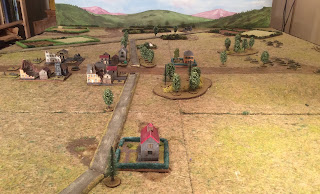 A closer view of Cambes en Plaine, the main village is behind the road, in front of the road are a series of isolated buildings and small wooded areas. We allowed the 12th SS to set up, up to the road and to dig in all the 88's, making them very hard to hit. 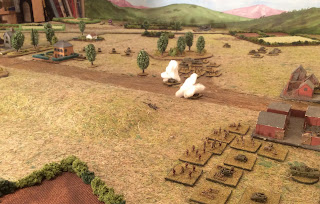 After a couple of very poor command rolls early on the Royal Ulster Rifles finally get in gear, they are split into two units supported with heavy machine guns, mortars, some Bren gun carriers and a couple of Churchill infantry tanks for support. 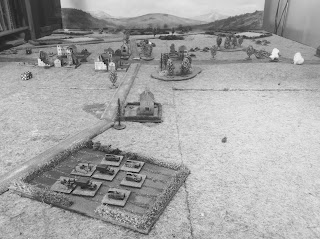 Anything on the road immediately comes under fire and two of the East Riding Yeomanry are brewed up. The tanks immediate drive off the road to the west. 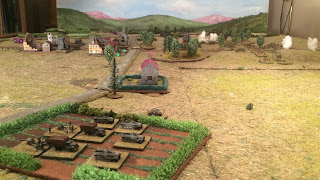 Having set up half the German force we allowed Pnazer Meyer to bring the rest of his force on as reserves, excellent German leadership brought them on straight away, more Panzer Grenadiers are being sent down the German Right flank, towing even more anti-tank guns, in this case 75mm Pak 40's I think.

In the far distance Panzer IV's have pushed onto the battlefield, the Rifles are continuing to double time down the road, but are paying a high price to the mortars which proved very effective, somehow they were able to target the heavy machine gun units ! 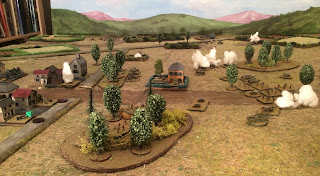 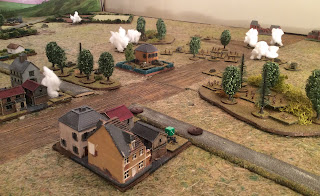 A shot from behind the village (above) the Yeomanry outgunned by the Panzer IV's has pulled back towards the village, whilst the Royal Engineers hugely outgunned take up a covering position in the distance, hoping if nothing else to delay the Panzers from completely outflanking the attack. 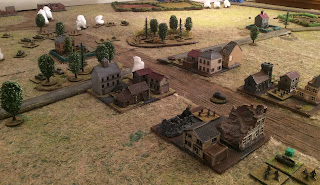 Looking North East the smoke in the distance is the remains of the Canadian antitank unit they proved far too exposed. 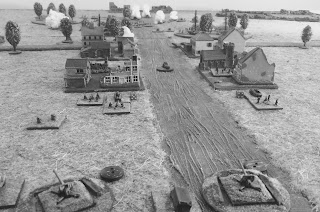 Another view from behind Cambes the 88's can far right through the village, no armour is able to stand for long on the road !

At this point the Ulster Rifles have made it to the near wood and have taken the first part of the village with the Sherman's of the yeomanry in the further copse, the casualty count is however completely unbalanced with something like 15 units knocked out against only 2 of the Germans ! 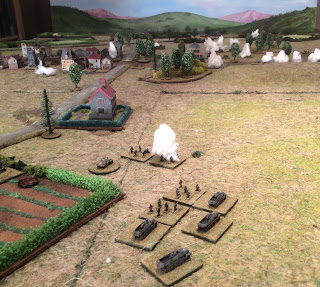 Having knocked out the anti tank unit the fresh Panzer grenadiers remount and start to move in towards the allies left flank, despite coming under fire for allied mortars close to the road it is an ominous sight. 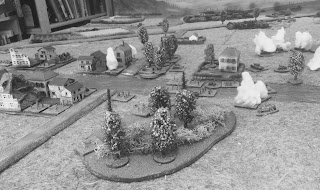 This was pretty much the high point for the allies, although they hadn't failed their break test they were now at breaking point. They are clinging onto the first parts of the village and the woods, the remained of the Royal Ulster Rifles are in a position to push into the village but they are looking over both shoulders with the risk of being outflanked on both sides. At this point the allies chose to call it a day and pull back......this is surprisingly not too different to what happen historically. But the SS also then pulled back to create a more coherent defensive front. 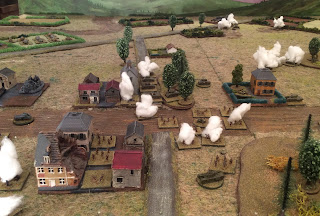 A really enjoyable but difficult game for the allies, I had several poor leadership rolls which hampered them from the start. I also miss calculated the naval artillery support and this put them at a big disadvantage. They will learn for next time...... 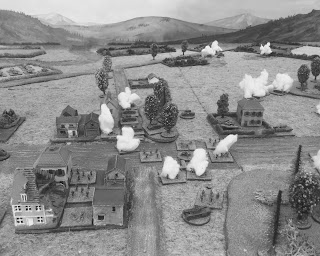 Next up for Normandy at least........Operation Goodwood
Posted by Matt Crump at 17:26