I don't want anybody to think I paint a unit every evening, I tend to have several units on the go at once but every now and then several get completed around the same time. Such is the case with these crossbowmen. Pretty happy with these and with only 8 their costumes are slightly more decorated. 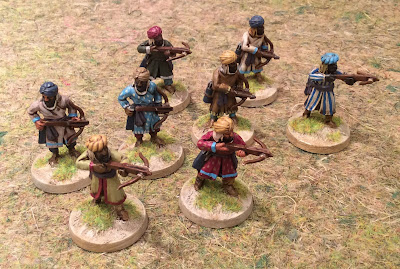 There are only eight of them ideal for saga but can be used at a stretch for Lion Rampant and other small scale skirmish games. 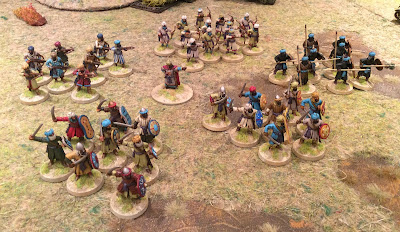 I then thought it would be a good time to take a photo of the developing Moorish/Islamic Army to date...a mixture of colourful swords men, intimidating spearmen and missile troops. I do have a couple more spearmen units to complete but they aren't prep yet. I'll take votes on whether to do more dark colours or colourful units ? I have some Turcopole mercenary archers a small unit of camels but at some point some nice gripping beast cavalry will be needed. Nice to see them developing into a force which could see action on the table soonish 😀