The Battle of Bairén 1097 : Hex based Wargaming

We played the inaugural hex based battle in the dungeon this weekend. There were three main drivers for me developing a hexed based gaming setup, one it helps clarity for remote gaming especially around measuring distances, two it gets my figures out on the table and in play, three it allows me to explore historical battles where my collections are not of sufficient size for a larger traditional open battle. All three of theses objective were achieved in this battle.

The Battle of Bairén 1097 is one of El Cid’s famous victories, although when you search it is hard to find much conclusive information. What is known is that after some manoeuvring the Almoravid Islamic forces under Muhammad ibn Tasufin had caught the Christian forces camped out of position. The Almoravids took the higher ground and were also able to bring archers and crossbowmen in by boats to harass the Aragonese  forces in their camp. Rodrigo supported by Peter 1st of Aragon roused his force and charged up the hill to assault the Muslims, caught by the ferocity of the attack the Muslims broke and fled many killed attempting to escape. 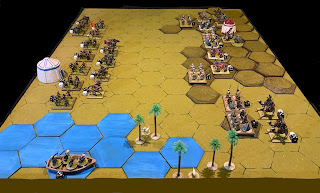 The setup for the battle, El Cid and the Aragonese to the left, the Almoravids on the higher ground. We would be using Jon’s ‘hex based’ impetus rules. Victory points would be for forcing the enemy back or capturing the enemy camp. Both sides would start with 11 points which would reduce down to zero when the battle would end. The Almoravids out number the Christians but lack the heavy cavalry. 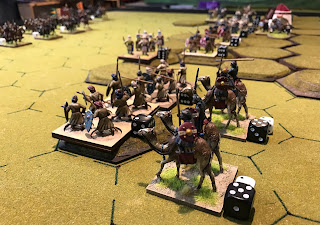 The Almoravids have some heavy camels, for info the black dice mark the unit rating which reduces when losing wounds, the white dice marks the remaining impetus value. 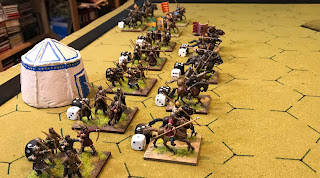 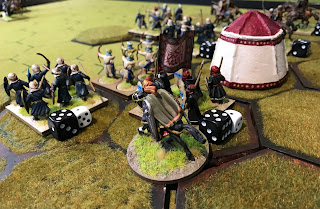 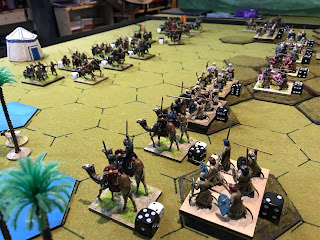 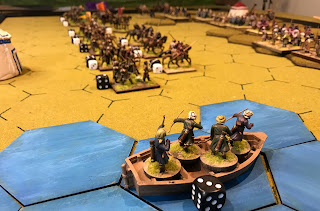 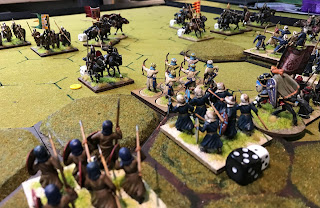 The Christian knights immediate charge forward to attack some archers who have come too close, but surprisingly they are forced back 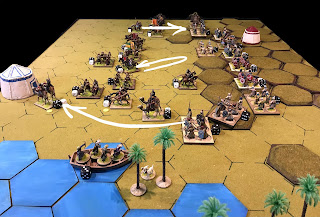 I didn’t take too many photos and we have skipped a little here the Camels have already broken through on the Christian Right. The initial charge has been turned back. But the Almoravid right flank is under heavy pressure. 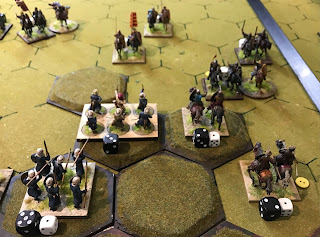 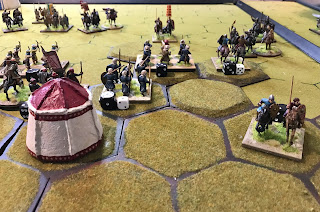 Brushing aside the Almoravid light horsemen 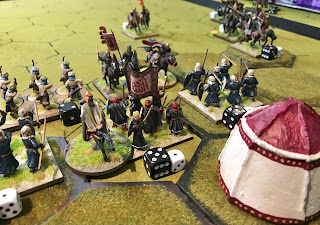 In good style El Cid leads a charge into the centre of the Almoravid line, the black guard initially hold 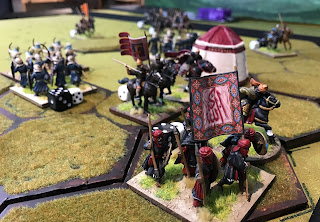 But are then forced back 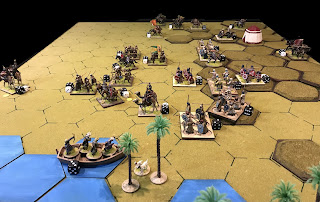 At this point the battle which had been going the way of the Christians started to go back towards the Almoravids and I think both sides were down to 4 remaining points before the army would break, the Christian camp has been captured on the light of the picture. 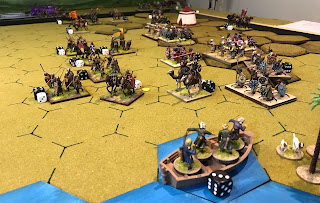 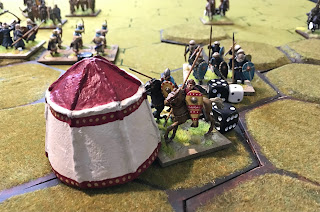 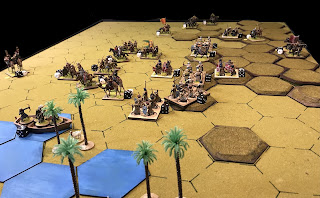 An overview at the end of the battle. My rather poor description hasn’t given the real excitement and fun of the battle which was very close and could have gone either way. As always there were some key moments when the battle swung back to the enemy. In the end then a historical outcome for El Cid.
Well a very successful first run out for the hex gaming. Technology worked well as did the rules which are adaptable to a wide range of periods. The hexes give a different feel to the battle  which took a respectable 90 mins to play. So might give the option at this size to play through twice. As mentioned as I expand my terrain I can field larger hex battles upto 6x4 feet. This also opens up lots of options across many genres for other games. One option in the future is to play battles in hex format and then when figures are available to expand them to a larger table ? Lots of options and things to think about 🙂