Our latest instalment of Dux Britannium saw us finish off our first year, roll for any special events, luckily none of our Lords or Nobles died ! In the New Year Ivar decided to bring it on in a very Viking way choosing to play our first full on battle rather than raid. The set up saw Ivar rushing across the battle field with Lord Eadwulf apparently holding back close to the settlement. Luckily he had his better trained Warriors with him and he had the sense to form up in to a shield wall but would they hold........or be overwhelmed﻿ 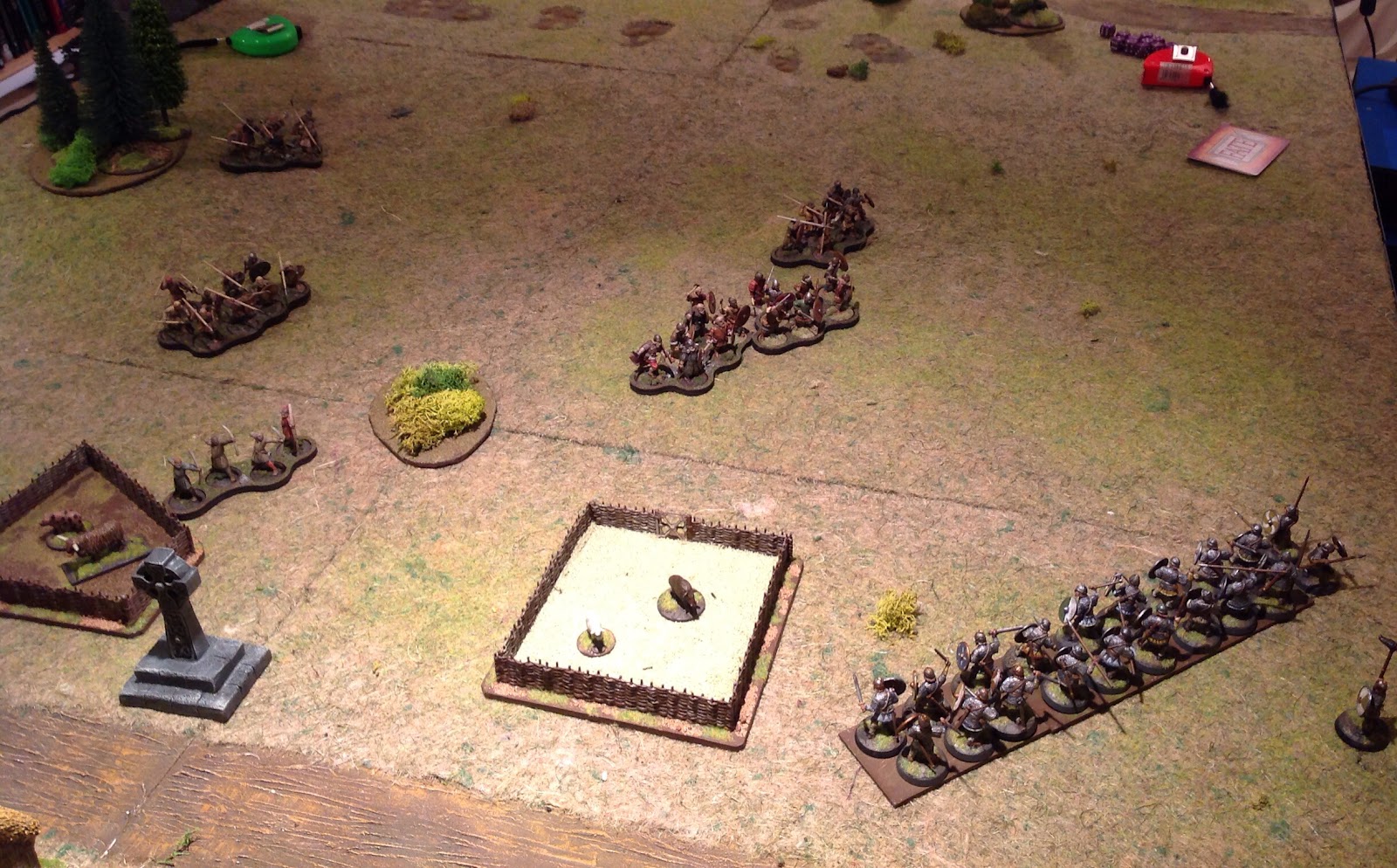 In his haste what Ivar hadn't noticed was Eadwulf's hidden levy ! (Eadwulf had chosen to pray for a miracle and this had allowed him to hide a unit with a noble somewhere on the battlefield - causing shock to the Vikings if they arrived at the right time a gamble, but a miracle is what they needed)﻿
﻿ 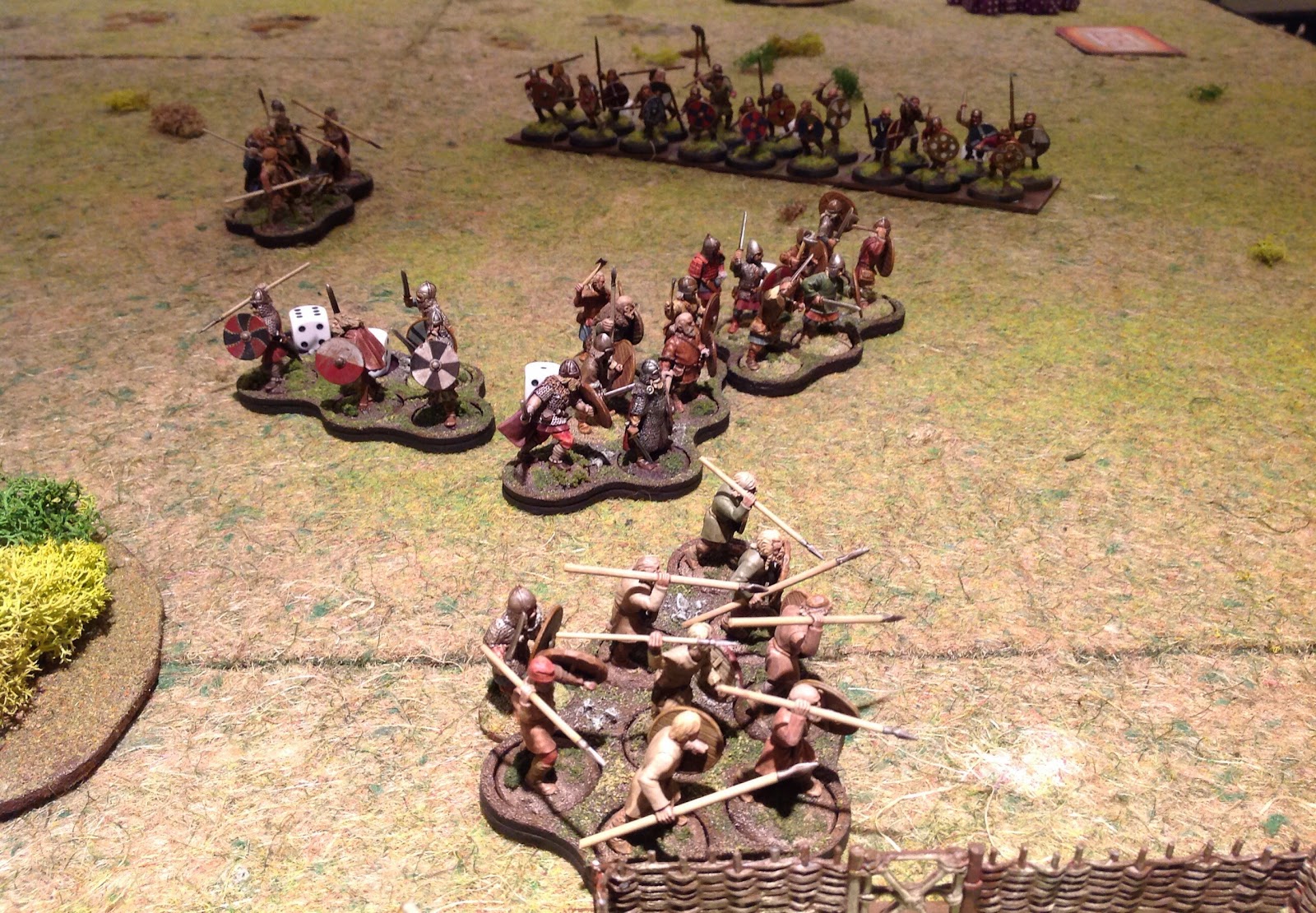 The trap was sprung and the photo above shows Eadwulf's levy under the command of Noble Godwald literally leaping out of the ground, well actually they were probably lying down in amongst the long grass. Caught completely by surprise the Vikings were immediately shocked, but they kept their focus on the main British shield wall.  Godwald formed up his lightly armoured levy calling on them to lock shields and they plunged into the flank of the Vikings. 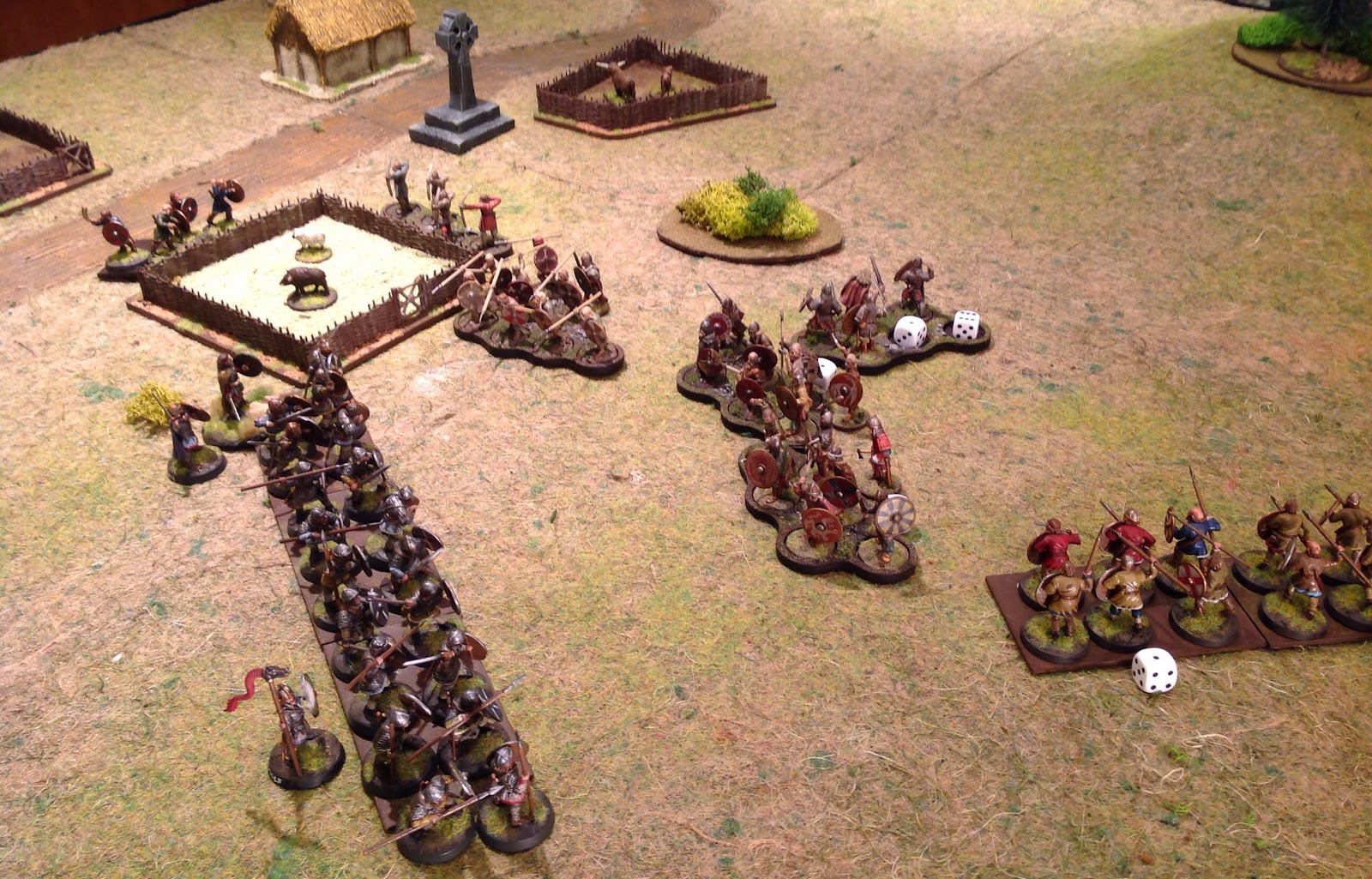 Some lucky dice (not my blue dice !) saw the levy hacking chunks out of the Viking left flank. They were immediately shocked and ran for their lives. Despite then bringing reserves up as quickly as possible the situation suddenly looked dire for Ivar if he couldn't hold back the levy his force would be surrounded and slaughtered. 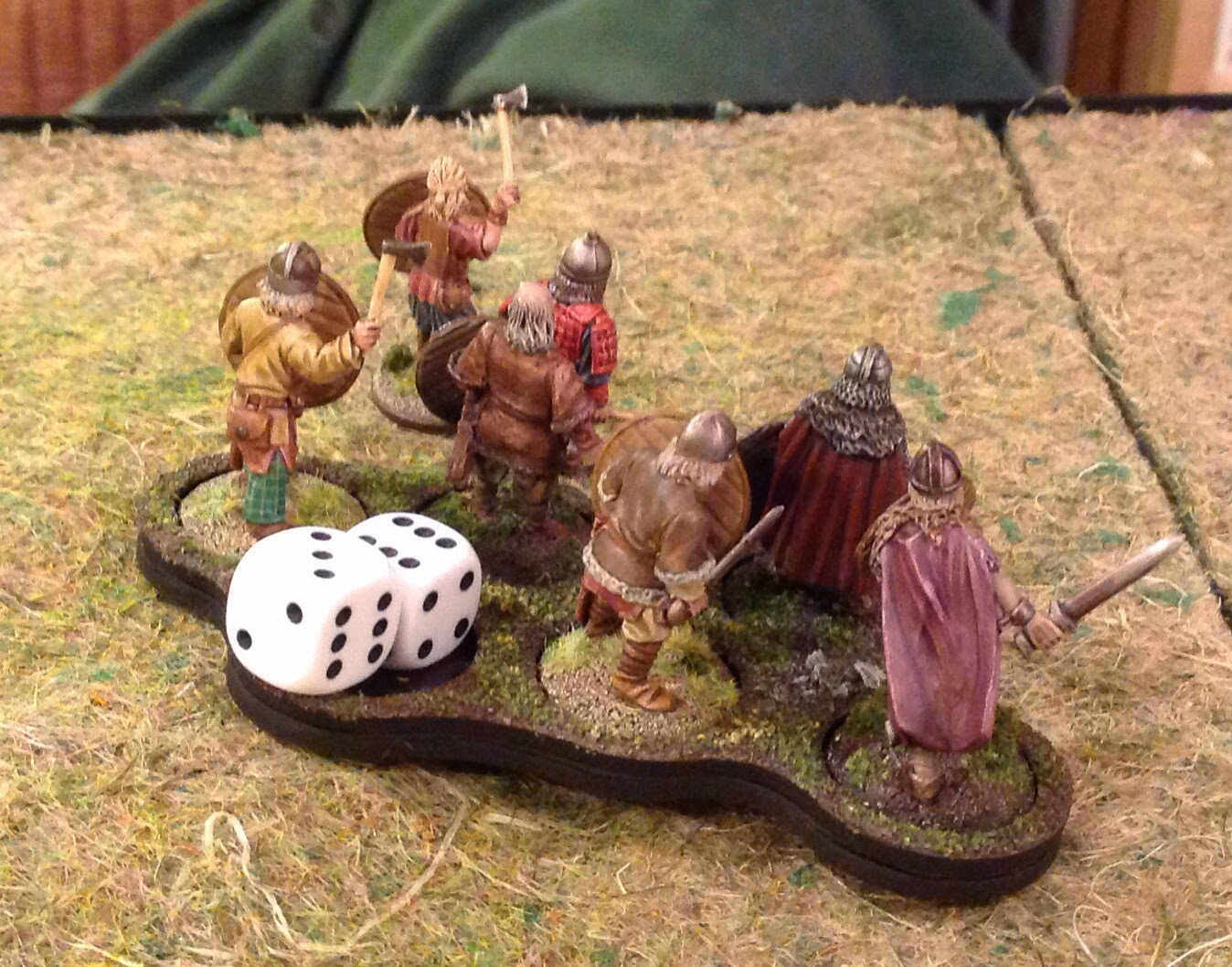 A couple more turns of desparate fighting, with the Eadwulf pushing forward with all his units and having the advantage of being in shield wall formation with locked shields, saw the Vikings pushed back or running for their lives. Reputations are hard to gain and even harder to lose and sadly Ivar had no choice but to flee, he can be seen above running for his ship leading the remnants of his bodyguard. (we are still using white dice as shock markers and yes 9 is very shocked) 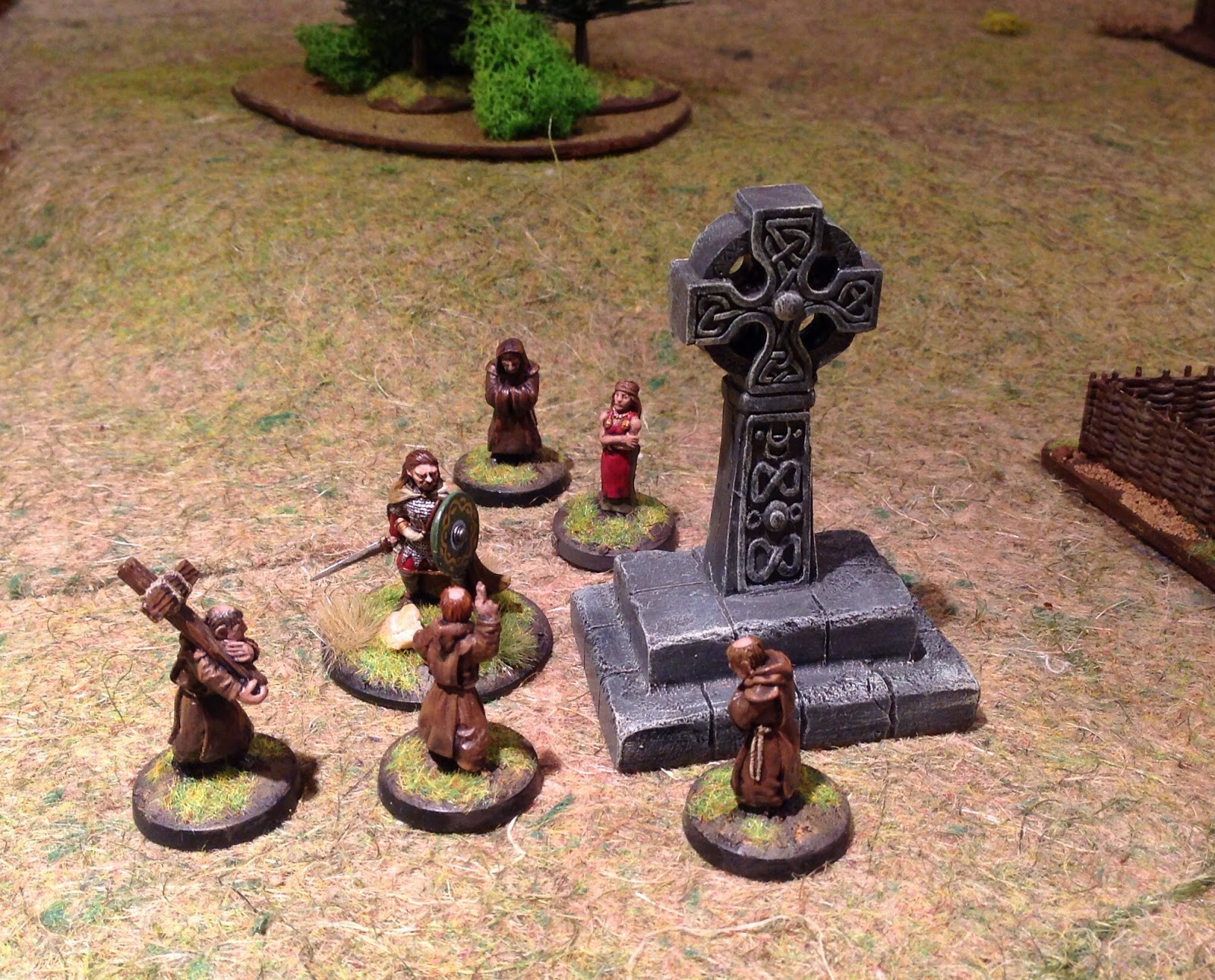 ﻿
When we tallied up the points it had been an unbelievable victory for Lord Eadwulf. In recognition of this he is seen here receiving the blessing of Abbot Cuthbert. From hence forth he would be known as Eadwulf the Good for the service he had done for the church. He would also be able to hire two new warriors and found enough coin on the dead Vikings to make a sizeable donation to the Abbot for the construction of a new church. After all it was only by the grace of god that they had won the day. It would be sometime before Ivar the Coward would return.
Posted by Matt Crump at 11:09