As well as a trip to York last weekend we managed a game in the dungeon. A vast horde of 'grey' elves took on the might of a mixed Ogre army. It has been some time since we had so many monsters on the battlefield. I didn't take that many photos as the grey elves are not terribly photogenic. 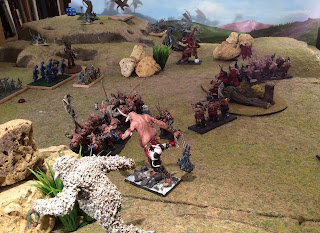 With 2500 points a side we had quite a lot, the Ogres had two ogres and an arch fiend (daemon) monster as well. Somehow the daemon which should have been awesome was killed off without doing anything 😢 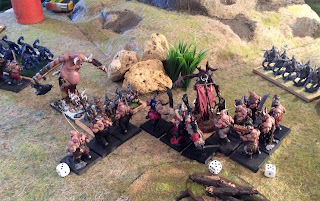 Kings of war rules can give a fairly random element to a battle and this was reflected in the game, initially the elves took the lead killing off a couple of key units including the daemon. Then the Ogres managed to get across the field and into combat a couple of very tight 'nerve' tests and the two largest eleven hordes fled the table suddenly the battle had turned. Then it all looked like is was swinging back the other way with in turn five no less than four ogre units being knocked out......... 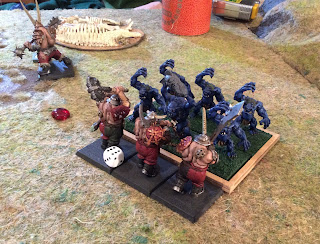 ....but then the stronger combat of the ogres played out and a crushing defeat for the elves. The game gave us a lot to think about, quite enjoy the KoW rules, they are much simpler than WHFB so are easier to pick up, but they do seem to have a random element which makes units disappear suddenly and sometime unexpectedly. Anyway a fun battle, not too serious and the elves are looking for revenge.