The Battle for Lympne : Operation Sealion 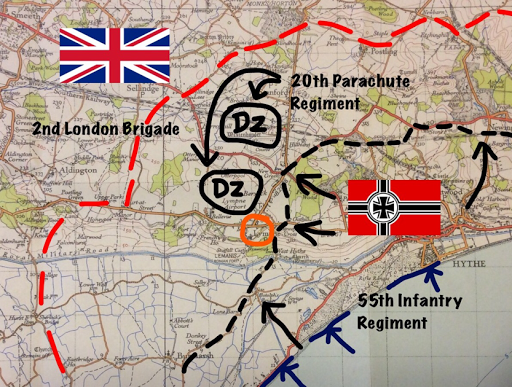 We are drawing to the close of S day in 'Blau Sector' where the 55th Infantry Regiment has landed. The ever ambitious German planners had aimed to sweep inland past Hythe to take the higher ground drawing a line from Postling through Sellinge and down to Dymchurch. Stiff British resistance has slowed their progress and classic cloudy British summer weather has prevented the German Fallschirmjager from concentrating on key targets. Leaked information through effective British spy networks seem to have given more warning of the invasion, and they have been able to get more troops into key defensive positions on day one than the Germans had anticipated.

However, the Germans have a strong foot hold in the Area between Hythe and Dymchurch. Whilst their original objective line (Red) now seems out of reach for S day they are still driving forward. Another key objective is the Airfield at Lympne, they have avoided bombing it so they can bring it back into use as soon as possible. Scattered and isolated pockets of Parachutists are causing panic in the area, but they have not been able to secure the Airfield. The 55th Infantry Regiment has now been ordered to drive towards the Airfield to secure the road intersection at Lympne to enable a push on the Airfield by nightfall. Opposing them are infantry from the 2nd London Brigade, supported by elements of the Royal Tank Regiment. Having already lost the cross roads at New Inn Green the remaining tanks are being diverted south to hold the Airfield.

This sets the scene for the battle I am running at Albanich Wargame show 11th March, Dumfries and I post a few more updates on the plans as they develop 😀
Posted by Matt Crump at 22:55