Have been off the grid for half term week in Edinburgh, with no TV which is great and rubbish internet connection liberating but slightly annoying. (Note to self I am slightly addicted to blogging so a rest every now and then is a good idea). Anyway last weekend we played our next instalment of our Age of Wolf Campaign. This being Campaign season 2 saw the Saxons defending their homesteads against marauding Danes. 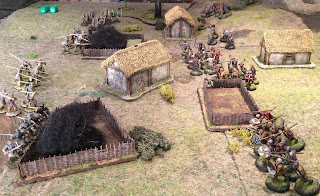 The scenario which is a new one in the campaign allows a very close set up. The attackers the Danes in this case are looking to burn fields and buildings. It was obvious this was going to be a fast a furious battle. 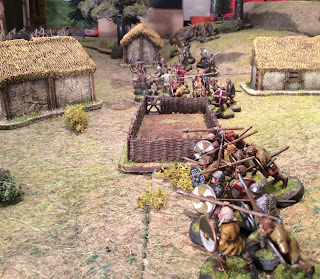 The Saxon battle line in the village, the Saxons having performed badly in previous battles have had to employ another mercenary unit to balance the sides 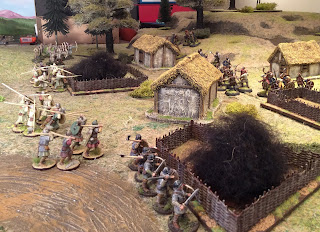 The Danes go straight for it setting two fields on fire immediately, the Saxons answer with ineffective arrow fire ! 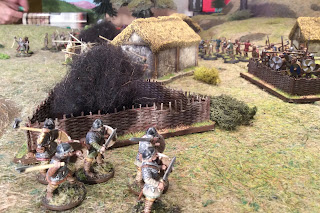 Seeking some form of cover the Saxons jump into the fields but the Danish Hearthguard are looking to get into close combat, this is axe work not for shooting. 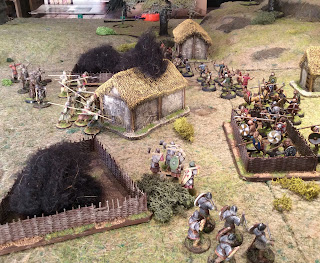 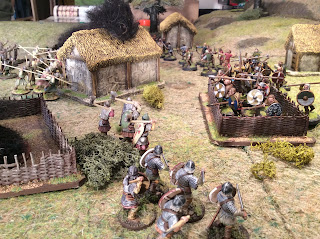 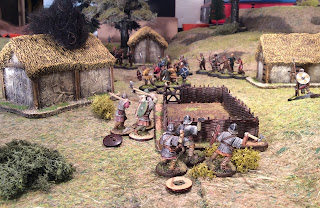 I didn't take many photos from here on in......but another field was put to the torch as well.

A very tough battle the Danes outplayed the Saxons whose performance was amplified by some pretty poor dice. In the end the battle casualties were quite close but the bonuses of the burning fields and houses gave the victory to the Danes. The Saxons are looking pretty sorrowful now in the campaign and not sure if they are recoverable, meanwhile the Vikings and Danes forge ahead. The challenge of all campaigns is when one faction starts to fall behind maintaining enthusiasm. We may need to bring another faction into the campaign perhaps the tricky Welsh ?
Posted by Matt Crump at 10:19