“They run as if the very whips of their Masters are behind them” : LOTR

For our next virtual game we played a follow up to the previous capture the Hobbit scenario.  Despite some technical problems with my internet the game worked ok I think a re-run would see Saruman getting involved. Anyway suffice to say as a Tolkien and Peter Jackson fan we modelled it around the film where the ‘three hunters chase the Uruk hai across the plains of Rohan. 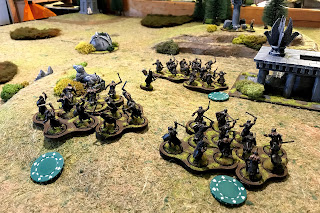 Three groups of Uruk and Lurtz must make their way to safety and Saruman in the distance. The three hunters, Aragorn, Legolas and Gimli aided by a small group of Rohirim must rescue the Hobbit. The challenge is only Saruman knows which group is carrying the Hobbit 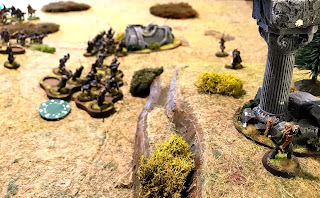 The three Hunters arrive over the crest of the hill, for once Legolas is of target with his bow though ! 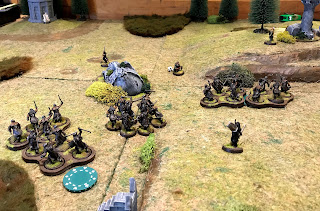 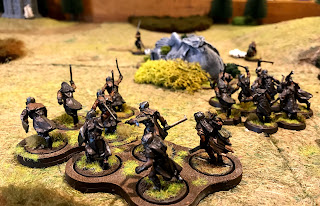 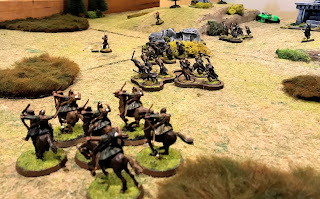 The Rohirim shoot at long range but have little effect 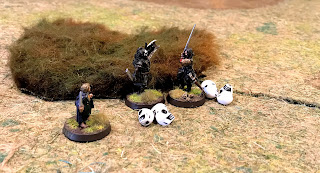 I have skipped a  bit here as the hobbit was released and recaptured several times, eventually Lurtz grabbed him only to be attacked by Aragorn.......but most un-cinematic, Lurtz lops the head off the Returning King of Gondor 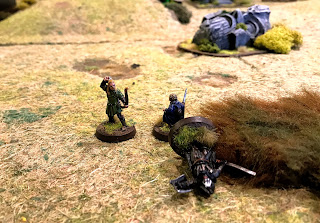 With almost everybody else dead the pointy eared elf jumps in to save the day, kill Lurtz and save the Halfling !
Bravo some harmless fun for wargamers who love LOTR 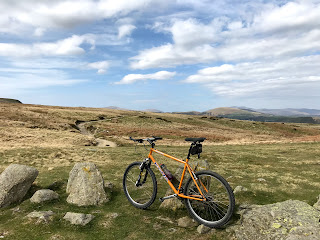 Email ThisBlogThis!Share to TwitterShare to FacebookShare to Pinterest
Labels: 28mm, Dragon Rampant, Lord of the Rings