Skirmish in the East Woods : Battle of Antietam 1862

After moving red and blue wooden blocks about for a few (enjoyable) games it was time to get a proper (virtual) miniatures game in. One of my “targets” for the year is to play some more historical based games and part of this is an ambition to play all of the scenarios from Brad Butkovich’s Antietam scenario book. This is titled Brave Hearts Trembled and is well worth a buy if you are interested. If you track back though my older posts we have played a number of his Shiloh battles already.

Anyway onto this year the first scenario in the book is a smaller battle based on the skirmishing which took place on the evening before the main battle 16th September 1862. This makes a perfect battle for Rebels and Patriots and is just manageable as a virtual game.

The history is well covered in Brad’s book but in simple summary Brigadier General Truman Seymour 3rd  Division 1st Brigade are the first to the battle field and marching north then west bump into the pickets of General Hood’s division. A sharp skirmish then took place to occupy the East Woods close to the Smoketown Road and the Miller Farm. At the end of the day as darkness fell the Confederates were ordered to pull back and it was this same area which saw the famous assault by Union Troops through ‘The Cornfield’ to start the main battle on the 17th.

Setup : I managed to squeeze as much of the battlefield onto my 4x4 table including the main elements of the Eastwoods, the Miller Farm and the Cornfield. We used the scenario pretty much as written with a couple of tweaks. There were a couple of ‘special’ rules, the woods are light and only provide light cover, the Cornfields block line of sight, after 8 turns ranges will reduce to 12”  and then the game will randomly end between 8 and 14 turns unless one side has already fled. 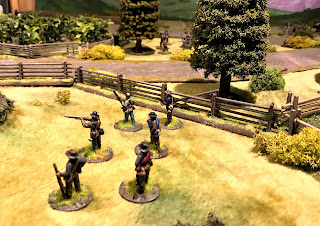 The 4th Texas skirmish close to the Miller Farm, beyond them skirmishers of Colquitt’s Brigade in the East woods 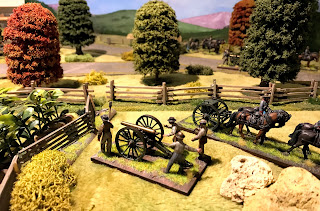 Irwin’s Georgia Battery and slightly raised ground behind the Cornfield 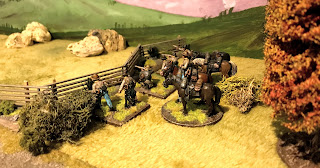 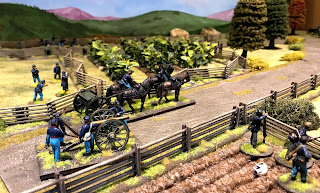 The leading elements of Seymour’s force 3rd Pennsylvania Reserves again skirmishing , Battery B 1st PA and in the far distance beyond the smaller cornfield the 13th PAR sharpshooters. 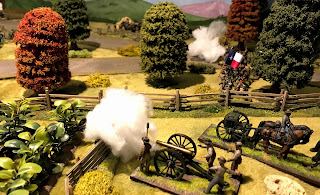 With the arrival of the Federals the Rebel guns open up 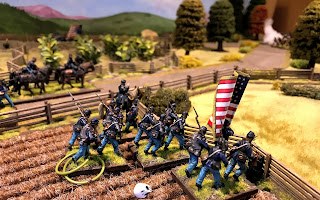 BG Seymour leading his brigade with the 1st Pennsylvania Reserves are quickly disordered and with some bad activation rolls the Federals are slow to get off the mark. 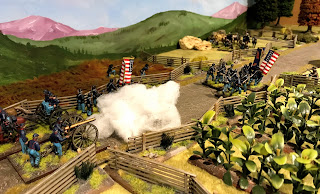 More Pennsylvania Reserves move down the Smoketown road and their supporting artillery opens up, but they come under skirmish fire. 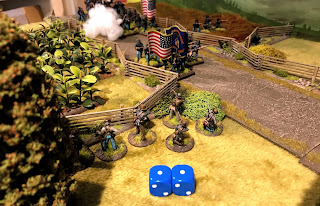 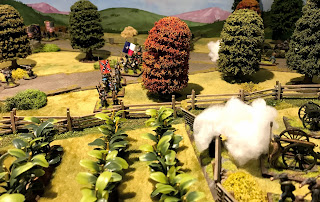 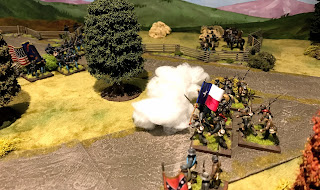 ...and the 1st Texas led by Colonel William Wofford opens up through the trees 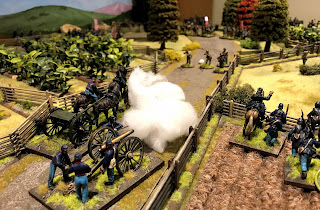 Battle continues but the Federals are not making much headway 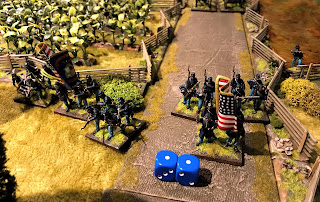 and then they suffer a double 1 as well (I should say at this stage we played about 11 turns, and between us we rolled an unbelievable 9 snake eyes) 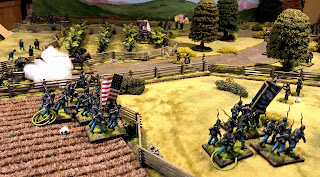 Eventually though the numbers of Union troops begin to count and the Rebel skirmishers become disordered and weakened the 6th Pennsylvania Reserves break out into the open fields at the Miller’s Farm. 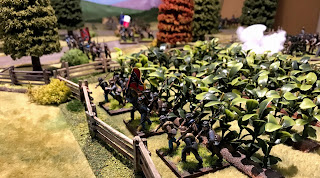 But the Confederates are already holding the Cornfield 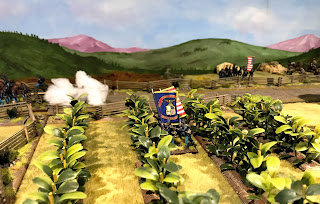 Close to the smoketown road some of the Pennsylvania boys are pushed back through the smaller cornfield. 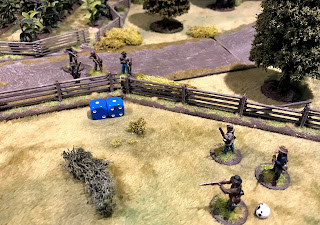 Another double 1 (we were laughing quite a bit at this stage) as ones set of rebel skirmishers presumably in the growing darkness turn and shoot at their own side ! 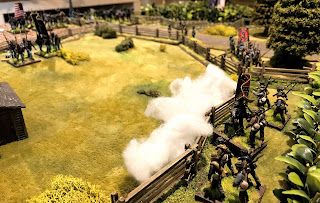 The Rebels in the cornfield fire a powerful volley, which disorders the 6th PAR 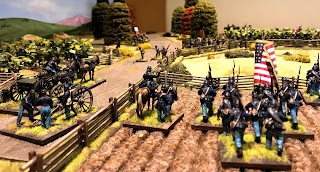 A closer shot looking in the gloom up the Smoketown road, at this point the Confederates are pulled back deeper into the East Woods to prepare for the following morning.
An enjoyable game, difficult for the Union forces who had some spectacularly (really spectacular) bad dice rolling early on failing several activations, but it felt like a proper wargame and the size fitted well with Rebels and Patriots. There are several more scenarios some very large which I really want to play in the shed later in the year.
Hope you are well, keep safe 👍