Well we all need a new project don’t we ? , as a number of my projects have reached the scale where they are slowing down I felt it was time to kick off with something new. This certainly wasn’t a rash decision as I have been pondering for many months what direction I might go. Of course this could be quite a long post about other future projects which I have in mind and which one day may come to fruition but as a few of you will know I quite enjoy holding these projects in my head, sometimes for many years, I’ll occasionally write or jot down a few notes and then come back to them a long time later. But I try to avoid too much formality in my hobby so the list normally stays in my head.

Anyway a long winded introduction to my new project the Peninsular War which I have chosen to do in 28mm. The first unit finally got to the painting desk. 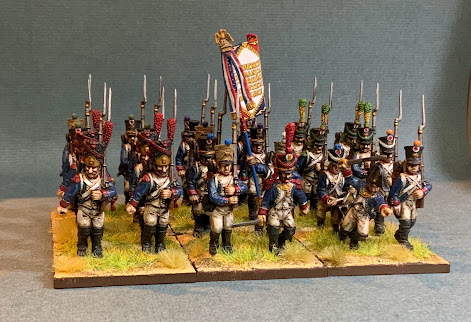 Here they are in attack column the figures are Warlord the flag Victrix, I’m not a button counter but feel these are good enough for me, the good thing is they are no harder to paint than AWI
Thought I might just expand on a few questions I have had to answer myself before starting this project. Why Napoleonic ? Well like so many it is my first love and was my introduction to the hobby, my original Airfix collection does very occasionally get some table time which is quite nostalgic but slightly frustrating as it never quite gives the spectacle or the sense of battle I am looking for. Why 28 mm ? This is a tough question these days with so many scales and options I can definitely see myself collecting Naps in a smaller scale in the future but for the Peninsular campaign I feel I have a chance in 28 mm of achieving the scale I am looking for. Perhaps the biggest push has been my success at the AWI in about 2 years I have collected and painted enough figures for both sides for a sizeable battle. I like the feel of the 24 man units and as the initial stages of the Peninsular develops it will allow smaller skirmish scale battles. My plan will be to field skirmishers on individual bases which can be ranked up if needed. Ideal for the 95th ! This means I know I won’t have to wait too long before seeing some action even if larger battles take a bit longer, the 24 man units break down easily for larger battles as well. Why the Peninsular ? you shouldn’t really need to ask this question should you ? I guess variety, colour, terrain….yes I plan some new buildings but of course a small factor is it builds on my Al Andalus collection. Why Warlord ? Having answered in my head the questions above I spent a lot of time looking at figure options. Having Perry in AWI and ACW it was an obvious option and some of these will find their way into the collection. But in the end I plumbed for the Warlord starter armies which I was able to purchase at a ridiculously cheap cost. With the addition of some skirmishers ? I’m getting a box of the 95th for Christmas, gives me a good starting point. Those sharp eyed will have spotted a box of cavalry from the show a couple of weeks ago 🙂 perhaps the most fun is allowing me some time to research nonsense like plume colours and flags such a lot of fun and options for me to mess things up 😀!!!!!
Anyway enough of my ramblings this project will bumble along in the background 👍