Crescent and Cross a game of Saga

It has been ages since we saw a game of Saga in the dungeon. But with my work mate keen to try anything I thought I would try and hook him into Saga. I have had Crescent and Cross for ages but we haven’t really played it enough focussing in the past mainly on the traditional Saxon/Viking version. One issue of course is Crescent and Cross is based on the first version of the saga rules. This doesn’t matter to me as I actually prefer this version.

Anyway I  now have plenty of figures suitable for most of the factions in my Al Andalus collection. With this in mind and after a short introduction to the rules we jumped into a six point battle with Crusaders vs Saracens. I didn’t take many photos as we were spending plenty of time discussing the rules. But here are a few of the battle 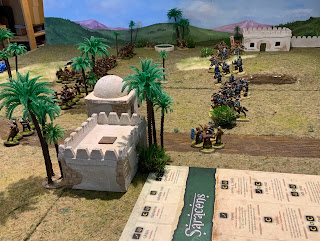 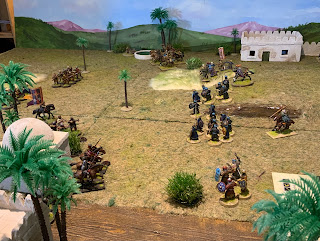 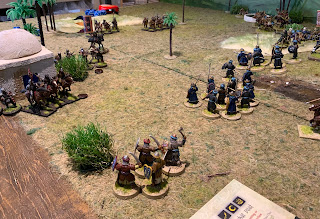 Strange to be playing Saga with smaller units, but the rules some came back 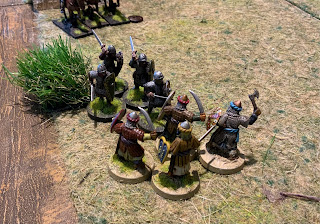 Two units of a try crash into each other 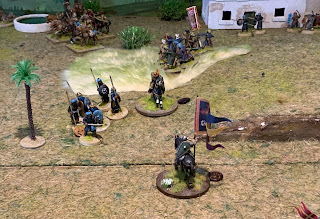 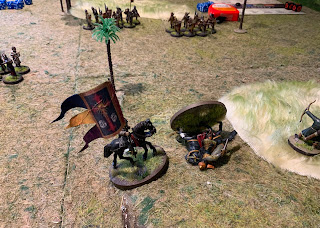 But then determine to be aggressive he charges in against the Saracen Warlord and finally gets the better of the combat.
A fun game with the crusaders getting the better of it. Nice to play these rules after a long period, they are very different from others but provide a fun and challenging alternative. We will be playing some more saga again soon.
Posted by Matt Crump at 18:28